Krugaar Gets Reel in Guardians of the Galaxy Vol. 2 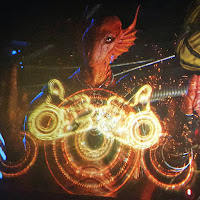 Information on the comics version of the character can be found at both Wikipedia (https://en.wikipedia.org/wiki/Krugarr) and the Marvel Database (http://marvel.wikia.com/wiki/Krugarr_(Earth-691)).
Posted by The Reel Wizards Project at 1:57 AM

Celebrating our twentieth anniversary in 2020, the Alliance for the Promotion of Research on the Matter of Britain is presently an independent affiliate of the Association for the Advancement of Scholarship and Teaching of the Medieval in Popular Culture. Our mission, first laid out in 2000, is to embrace the full corpus of the Arthurian tradition and to promote study, discussion, and debate of representations of the legends in all their forms as produced from the Middle Ages through the contemporary moment (and beyond).

The Reel Wizards project, an outreach effort of The Alliance for the Promotion of Research on the Matter of Britain, was launched in June 2010 by Michael A. Torregrossa, MA, though its genesis was in the early 2000s. If you are interested in helping with the promotion of our work, please e-mail Torregrossa as the above address.

Our founder, Michael A. Torregrossa is a graduate of the Medieval Studies program at the University of Connecticut (Storrs) and has presented papers on filmic wizards at regional, national, and international conferences. His published work includes “Merlin Goes to the Movies: The Changing Role of Merlin in Cinema Arthuriana” in Medieval Period in Film, Part 2, ed. Martha Driver, spec. issue of Film & History: An Interdisciplinary Journal of Film and Television Studies 29.3-4 (1999); “Merlin at the Multiplex: A Filmography of Merlin in Arthurian Film, Television and Videocassette 1920-1998,” in 1999 Film & History CD-ROM Annual, eds. Peter C. Rollins, John E. O’Connor, and Deborah A. Carmichael (Cleveland, OK: Film & History, 1999); “The Way of the Wizard: Reflections of Merlin on Film,” in The Medieval Hero on Screen: Representations from Beowulf to Buffy, eds. Martha W. Driver and Sid Ray (Jefferson, NC: McFarland, 2004); and entries on "Television" for both “Arthurian Literature, Art, and Film, 1995-1999,” eds. Norris J. Lacy and Raymond H. Thompson, in "Arthurian Literature 18 (2001) and "The Arthurian Legend in Literature, Popular Culture, and the Performing Arts, 1999-2004,” eds. Raymond H. Thompson and Norris J. Lacy, in Arthurian Literature.

Michael's complete profile is at Academia.edu.

What's New with Our Affiliated Blogs?